Did you ever like a doll instantly, like a "falling in love at first sight" kinda feeling?

I don't think I did.  Until now.  Most dolls took a while to impress me.  Even my favorite doll, the DAL dolls, did not wow me until after seeing them a few times.  I can be curious about certain type of dolls and then try to find out more about them until I really get interested.  But only in one occasion so far did I fall head over heels in love with a type of doll.

And this one occasion is when I saw the Susie R&D Dolls!

The first time I saw one, I was so intrigued that I looked for her everywhere for days and bought the first one that I could find.  She is a Riviera Breeze Susie (the blond version).  Once I received her, the feeling only grew and grew.  I just adore her faceup and her outfits were so well done!  And ever since then, I got hooked on Susie dolls.  Here below are a few of her pictures. 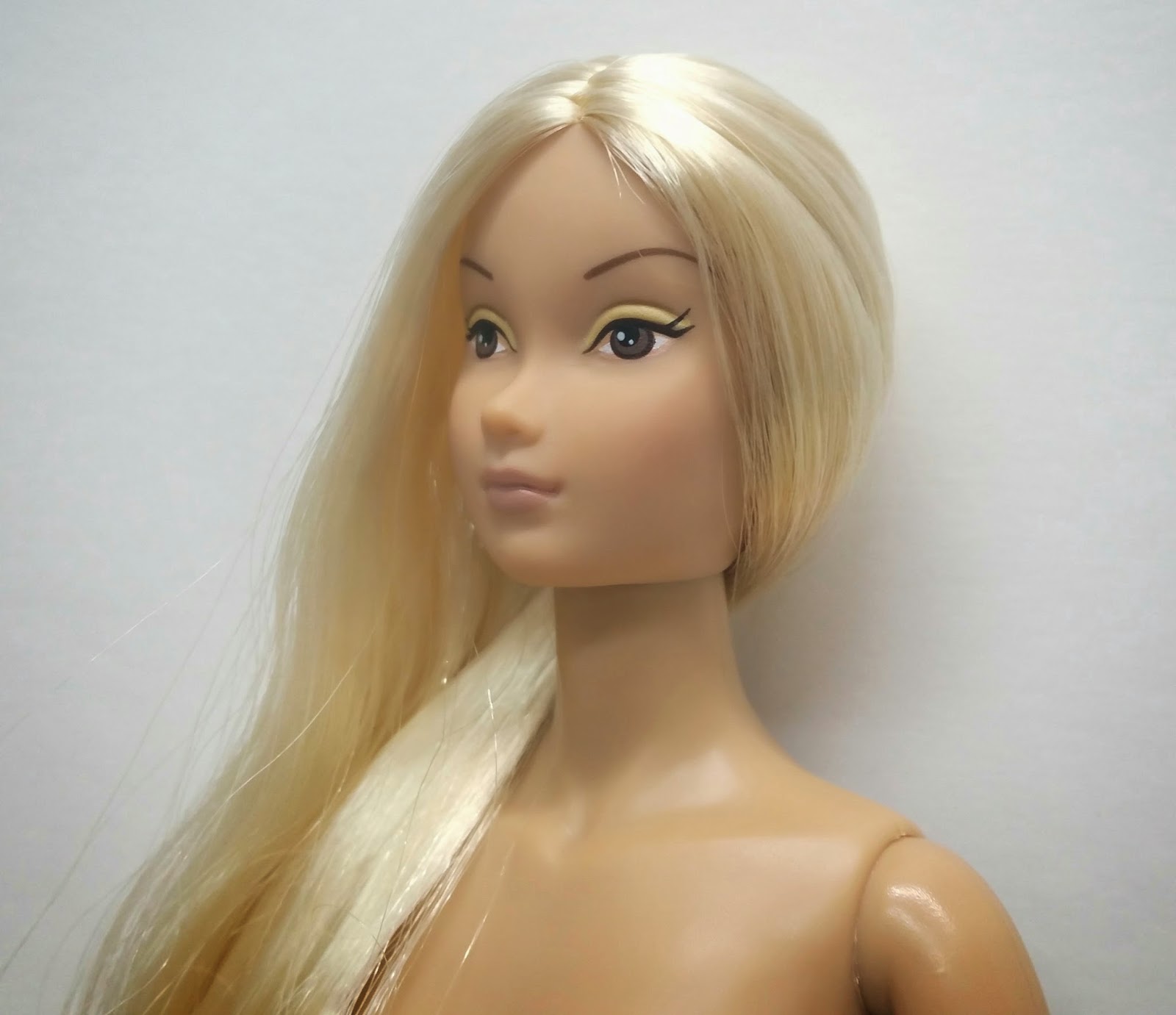 A Susie doll from R&D Collectibles (which are the initials for their creators: Randi Turuel and David Wu) is a jointed fashion doll from Taiwan with a distinctive face that you may recognize in the newly Dynamite Girl Susie Doll.  She is indeed the same doll.  Susie was first born in 2003 when she was produced by R&D.  She is now been marketed as a Dynamite Girl by Integrity Toys, famous for their Fashion Royalty Dolls.

The Dynamite Girl Dolls are around $70 (initial price) and are thus more affordable than the other Fashion Royalty dolls but the price tag can go quite higher once the dolls hit the second-hand market.

I love the most recent Susie called Freedom Susie.  Her face has a young and edgy look and I love her long black hair and trendy clothes but I prefer the older models by R&D.  They are however extremely difficult to find because they were only released in very small quantities.  Most models are produced in quantities of 300 and some have only 100 releases or less.  So my chances of getting the models I wanted for a reasonable price were slim.

But once again I got lucky.  A few doll collectors were downsizing their Susie collection and sold them for super cheap.  I had to put a cap on my dolly spending and told myself to only get one new doll per month from now on.  But when I saw so many Susie dolls going for one fraction of their original price, I couldn't say no!

Some of them were sold without their clothes but I did not mind at all because they were almost in new condition.  Some even had their hair still enclosed in their hair net.  And best of all, they were the models I most wanted! :D

Also important is that Susie dolls can wear many type of clothes, most notably Momoko, Takara Jenny and some Barbie clothes.  They can wear the Fashion Fever and Fashionista outfits very well so finding outfits for their closet won't be too difficult.

Susie is described as being a fashion designer and a fashion model as well.  She has quite a mixed heritage: her mother is Chinese American and her father is Spanish American.  She travels all around the world for her fashion photoshoots and each Susie release is named after a city.

If you want to know more about Susie dolls, there is a very good list of Susie Dolls on the Barbie Girl website HERE.

For photos, there is a Flickr Pool for Susie Dolls HERE.

I only have 10 dolls so far but I really wished I could own them all.

I will introduce each one of my dolls separately in subsequent posts and I hope I will do justice to their incredible beauty!

Oh I have missed the blog world very much!

I miss reading about your life, looking at your beautiful pictures and discovering amazing new books and dolls featured on your posts!

I miss writing on my blog too.  I am trying to come back gradually.   Today I setup a quick scene to introduce you to my new doll.  She is Yeolume, the future daughter of Pullip, a ten-year old elementary school student.

I find this concept quite funny.  Pullip is only 16 but Groove created a new character that would exist only in the future.  Yeolume apparently means "fruit" in Korean.  The first release is named "Podo".  She is dressed in a school uniform.

I named my first Yeolume "Valentine".  I imagine her to be shy, gentle and caring.

Since she is about the same size as Dal doll, I decided to buy another school uniform for my Dal so they both can attend the same school.

Here below is my friendly Scout telling Valentine to not worry about making new friends at school (^_^). 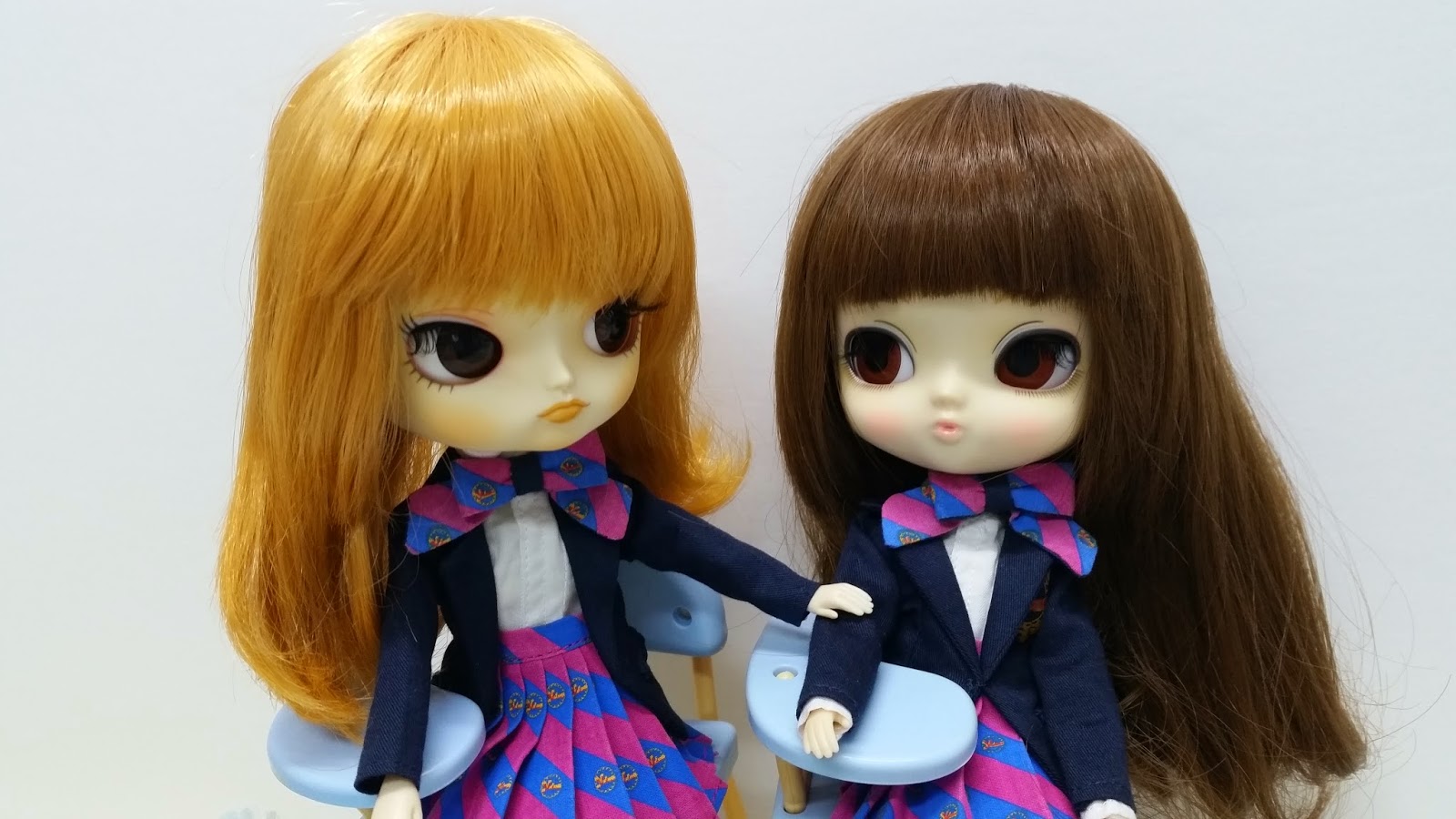 I want to take some close-up shots of Valentine so you can see how cute she is!

Her body is not easy to pose though.  It's not the same type of body as the other Groove dolls.  Her body reminds me of the Licca body.  It's not really ideal for posing so I may change it to an Obitsu or Pure Neemo.

I wish you all a lovely Wednesday!