A few months ago I decided to get a new type of doll, Usaggie Model 028, which was released on March 2016 by Petworks, the same company that makes Momoko dolls.  I was intrigued by these cute rabbits and I didn't quite know if I would like them.

You can read more about the dolls created by Petwork on their official website Petworks Doll Division.  It's called "Doll Division" because Petworks is actually a Software company but they also have a division dedicated to make dolls (^_^).

The Usaggie dolls are all sold without any clothes and the ears and head plate are usually not installed on the doll so you have to put them on the doll yourself (although the most recent model I received did have her ears installed on her already as you can see in the picture below).  Included in the box are two patterns to make a dress and overalls. 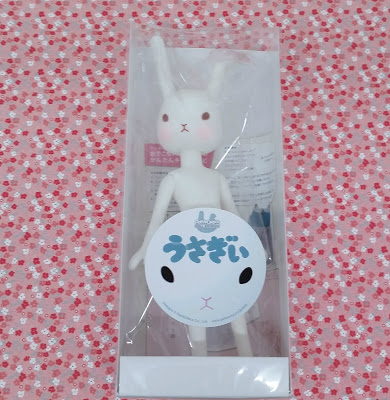 I bought Ussagie 028 on the website Ami Ami but I know older models of Usaggie are also available on the Petworks Store Global when still in stock and on Ebay as well.

I must say I was underwhelmed at first sight but once I gave her some clothes, I liked her very much and I decided to buy more Usaggie dolls and one Kumabolo doll :)

The shoes that can fit them are from (again, not all shoes will fit):


I bought 8 pairs of DecoNiki Shoes from the Petworks Store Global and there were quite affordable at only 648 Japanese Yen per pair.  They fit Usaggie and Kumabolo the best and I love that there were geta (shoes for kimono) available as well! 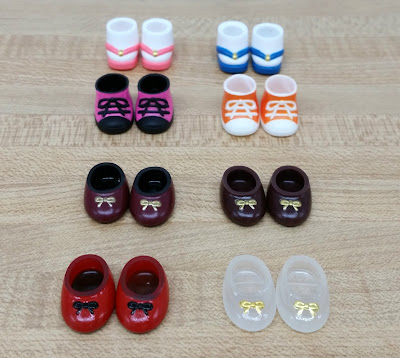 Since I did not have any official clothing items from Petworks for my Usaggie, I tried many type of doll clothes on her.   Here below are some of the outfits that do fit Usaggie more or less.  The fit is not perfect but some pieces can work:

Vi and Va dresses are a perfect fit but the shoes from Strawberry Shortcake can be sometimes too big. 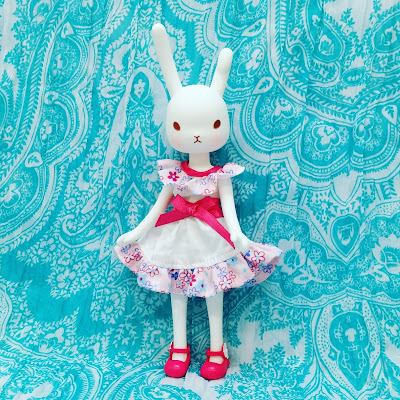 Dresses from Picco Neemo are too tight (they won't close in the back) but look good from the front.  The shirt if from BFC Ink dolls which are now discontinued but fit Kumabolo like a glove. 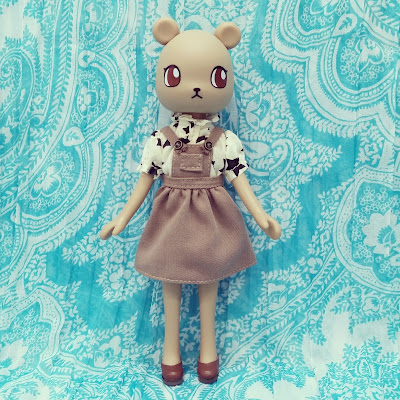 They can also fit most Madeline outfits from Eden. 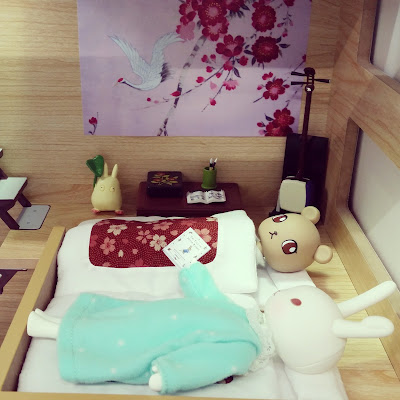 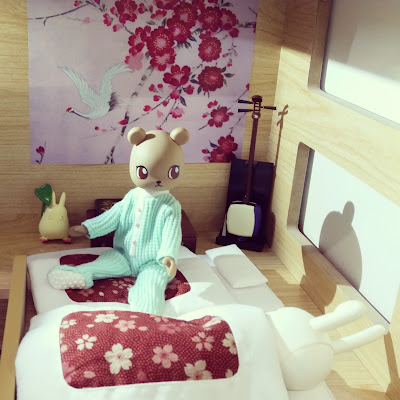 They also fit some Licca clothes and shoes. 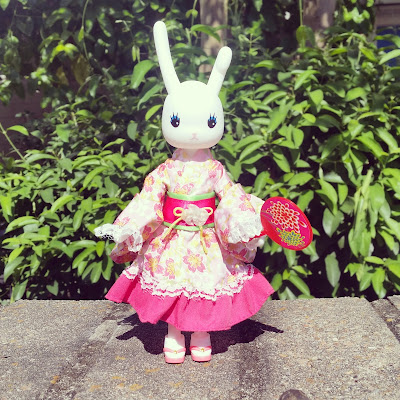 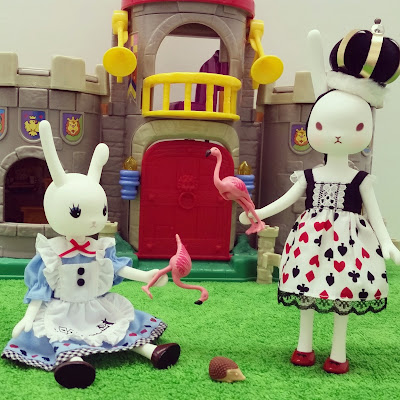 They also fit Only Hearts Club clothes like the ballet outfit! 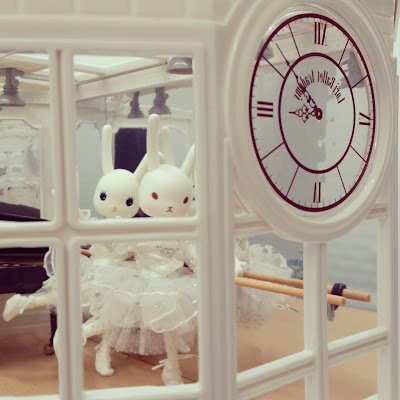 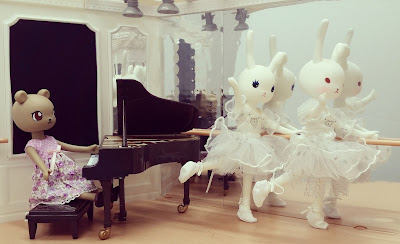 But I think they look best in custom-made clothes that fit them perfectly.  I bought dresses for them on Etsy.  They can wear the same dresses as Middie Blythe dolls too but not the same pants! 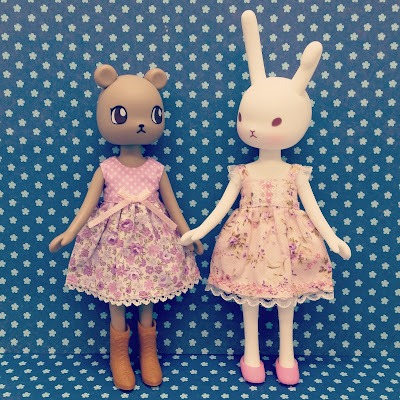 Disclaimer: All opinions are my own. I was not paid or received gifts to write this or mention any stores or website. You may find a better store in your area.
Posted by Jane Chérie at 9:01 PM 25 comments:

Do you remember my Lori OG Loft dollhouse?  I liked the modern feel it has but I wanted to give it a different look with other types of furniture. 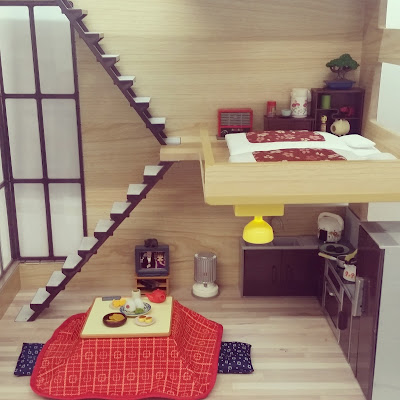 The dollhouse fits best with 5-6 inches dolls and 1:8 scale miniature so I used pieces from Re-ment and futon beds from Azone Pure Neemo. 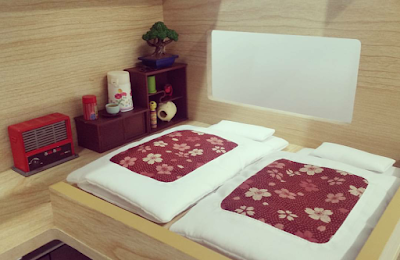 It was a fun project to do and although it seems strange to pair a western-style modern house with traditional Japanese furniture, I like the juxtaposed effect. 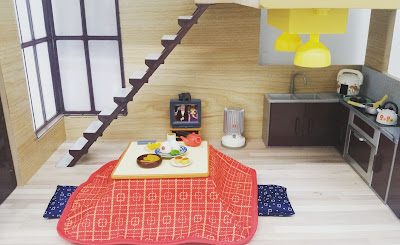 I took pictures with my two new dolls, Usaggie and Kumabolo made by Petworks (the same company that makes Momoko dolls).  I will tell you more about them in my next blog post. 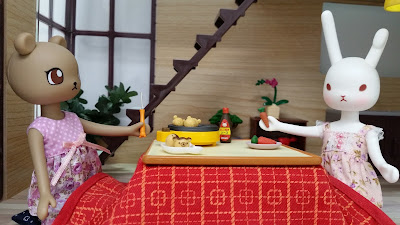 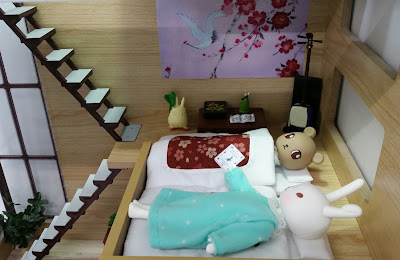 Note: you can buy the Lori Loft at Target for about $50 USD or even cheaper if there is a sale.  I noticed some sellers on Amazon and Ebay trying to sell it for 3 times that price and using (without my permission) the pictures I took and posted previously on my blog (>_<)